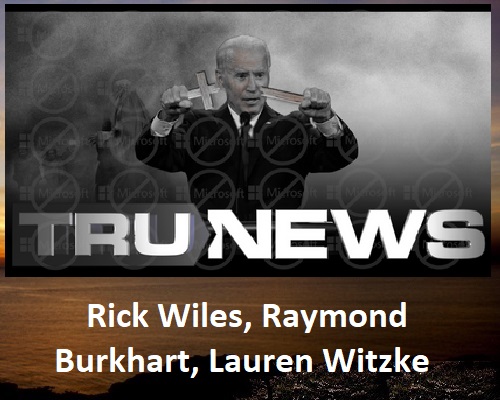 Today is July 7 and I am Dennis Michael Lynch. Below are my opinions on the stories grabbing headlines this morning. I hope you share this briefing as doing so will make you the smartest person in the room, in my opinion.

Haiti was already in a precarious political situation before the assassination, having grown increasingly unstable and disgruntled under Moïse. The president ruled by decree for more than two years after the country failed to hold elections and the opposition demanded he step down in recent months.

“The country’s security situation is under the control of the National Police of Haiti and the Armed Forces of Haiti,” Joseph said in a statement from his office. “Democracy and the republic will win.”

DML: How many refugees will this cause us?

Raytheon CEO Greg Hayes spearheaded the campaign called ‘Stronger Together’ starting last summer, which was revealed through training documents reported by Chris Rufo, a senior fellow at the Manhattan Institute, a conservative think-tank.

The documents instruct employees at the weapons-maker to strive for ‘equity’ over ‘equality’, and tutor them on ‘intersectionality’, a world-view that critics say divides people into different categories in a hierarchy of privilege and oppression based on race, gender, sexual identity, and other factors.

DML: Another company crosses the line in it’s attempt to pretend it’s compliant with the Democrats and radical media.  In short, the big bad white man must focus on not being white. That is until the company’s stock drops — then it’s ok to be white again and focus on making money.

Max Lewis, 20, was commuting on the city’s Green Line during rush hour on July 1 from his internship at an investment firm in downtown Chicago, the Chicago Sun-Times reported. While sitting inside the train, a bullet pierced the window and struck the back of his neck at the 51st Street/Washington Park Station, the Chicago Police Department said.

He died Sunday morning after he was taken off life support, the newspaper reported. Authorities said Lewis wasn’t the intended target and it wasn’t clear where the gunfire came from.

WGN spoke with his mother, Dr. Rebecca Rivkin, who said her son was alert, but the bullet caused catastrophic damage. He was paralyzed from the neck down and would likely need a ventilator for the rest of his life, the report said.

He reportedly communicated with doctors and family by blinking. He spelled out on a letter board, “If I have to live like this, pull the plug please. Seriously.” DML: According to Fox News, investigators have not released a description of the shooter.  I’ve got $100 that says the shooter is a young black male.  Anyone want to challenge my bet?  How about Raytheon CEO Greg Hayes, maybe he wants to bet me.  Or maybe he should open his woke training clinics is South Chicago.  Or better yet, maybe he should put his own office in South Chicago.  Do you think he’s got the balls?  Nope.

4.Covid-19 Vaccine-Related Blood Clots Linked to Amino Acids in New Study
WSJ – Canadian researchers say they have pinpointed a handful of amino acids targeted by key antibodies in the blood of some people who received AstraZeneca PLC’s Covid-19 vaccine, offering fresh clues to what causes rare blood clots associated with the shot.

The peer-reviewed findings, by a team of researchers from McMaster University in Ontario, were published online Wednesday by the science journal Nature. They could help doctors rapidly test for and treat the unusual clotting, arising from an immune-driven mix of coagulation and loss of platelets that stop bleeding.

The Canadian study analyzed blood samples from AstraZeneca vaccine recipients and builds on recent research done in Europe and elsewhere into the infrequent blood clots linked to the vaccine. Health officials are monitoring the rare side effects balanced with the vaccines’ proven value in fighting Covid-19. The blood clotting, which some scientists have named vaccine-induced immune thrombotic thrombocytopenia, or VITT, has also been linked to Johnson & Johnson’s Covid-19 shot, though incidents have occurred less frequently with that shot than with AstraZeneca.

DML: Joe Biden’s goal of getting 70% of Americans vaxxed by July 4 fell short.  So now says he wants the government to go door-to-door and convince Americans to take the vaccine.  Unusual clotting, heart issues for young men, unproven testing… I think Joe has a better chance of going door-to-door with hopes of collecting the 16¢ he saved us on July 4.  No vaccine for me, thank you.

The National Education Association voted during its annual assembly over the weekend to support teaching critical race theory in K-12 schools, approving a “New Business Item” that, among other things, established a task force for developing a curriculum focusing more deeply on race.

Opposition to critical race theory has animated school board meetings and local political races across the country, inspiring an activist movement some critics have claimed is manufactured.

MY PARTING WORDS: Over the weekend I had the great pleasure of seeing my two best friends at a wonderful event.  My best friends Jim and John have been like brothers to me since I was in middle school.  It was amazing to be with them and it’s a reminder that life is short — spend it with the people you love.  And don’t forget to use your DML CBD Face Serum before you do so.  You’ll want to be the youngest looking person in the room!  DMLcbd.com/face