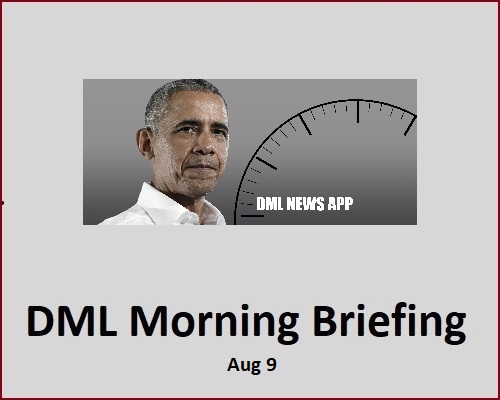 Today is August 9 and I am Dennis Michael Lynch. Below are my opinions on the stories grabbing headlines this morning. I hope you share this briefing as doing so will make you the smartest person in the room, in my opinion.

U.S. District Judge Kathleen Williams granted the preliminary injunction, allowing Norwegian to require vaccine documentation from customers while the case heads to trial. The Norwegian Gem is scheduled to depart Miami on Aug. 15. It is the cruise line’s first trip from the state since the pandemic halted the cruise industry’s operations more than a year ago.

Infection levels in Florida have risen 51% in the last seven days, according to data from Johns Hopkins University. The state reported 134,506 new Covid cases from July 30 to Aug. 5, more than any other 7-day period tracked by JHU, and new case positivity is at 18.9%.

“You can’t discriminate against customers on the basis of their refusal to give you information,” Patterson said.

If the cruise line had not received the injunction and continued to request proof of vaccination for the upcoming voyage, it could have been subject to prosecution and fines of up to $5,000 per passenger under the Florida law.

DML:  I say it is time to boycott any business, including Norwegian, that requires a vaccination card for entry.  I hope Gov. DeSantis has something up his sleeve to offset this radical judge’s order.  Lets get back to normal.

2.Fauci berates mass outdoor gathering in South Dakota, but gives Obama’s birthday bash a pass
Dr. Anthony Fauci ripped into the Sturgis Motorcycle Rally during an interview he held with Chuck Todd, host of Meet the Press. The outspoken Fauci pointed fingers at the massive gathering in South Dakota Sunday, agreeing with the far left host who suggested the biker event would be a super spreader of the Covid-19 virus.   Neither Todd or Fauci touched upon the massive birthday party held in Massachusetts for former President Obama.  Over at CNN, a NY Times reporter said it the critiques of Obama’s party were “overblown” because the attendees made for a “sophisticated, vaccinated crowd.”

DML: Finally, people are catching on to the scam of all scams. Over the weekend I was in an area packed with thousands of people, no masks, no vaccine cards, no social distancing. My only defense against the big bad boogie man known as COVID was a strong immune system.  It’s time for everyone to move past the nonsense; the concept of “back to normal” is here to stay. Dems will have to find another way to cheat in 2022.

3.Canada begins allowing vaccinated US citizens to visit again
Canada on Monday is lifting its prohibition on Americans crossing the border to shop, vacation or visit, but the United States is keeping similar restrictions in place for Canadians, part of a bumpy return to normalcy from COVID-19 travel bans.

U.S. citizens and legal permanent residents must be both fully vaccinated and test negative for COVID-19 within three days to get across one of the world’s longest and busiest land borders. Travelers also must fill out a detailed on application on the arriveCAN app before crossing.

Even though travelers have to register, the Canada Border Services Agency won’t say how many people they are expecting to enter Canada for the reopening. But travelers should plan for the possibility of additional processing time at the border.

DML: If you are unvaccinated then you should prepare yourself for every aspect of society, and every form of government, and every outlet of the media to crucify you.  If you can hold out, good for you.  People should not be forced into taking a vaccine that is unproven long term, limited in its scope, and is not 100% effective.   It should be a choice, bottom line — case closed.  Lets get back to normal!

4.Cuomo accuser rips into disgraced governor on CBS
Fox News – One of the women who accused New York Gov. Andrew Cuomo of sexual assault in state Attorney General Letitia James’ explosive report last week revealed her identity in a new interview, saying the Democratic governor “broke the law” and must be held accountable.

Brittany Commisso was identified as “Executive Assistant #1” in James’ report accusing Cuomo of sexually harassing 11 women, including current and former state employees, from 2013 to 2020 in violation of state and federal law. Commisso testified that Cuomo grabbed her butt while they took a selfie in the executive mansion in 2019 and that in 2020 he reached under her blouse and grabbed her breast.

Commisso revealed her identity for the first time in a joint interview with “CBS This Morning” and the Albany Times Union, just days after she became the first of Cuomo’s accusers to file a criminal complaint against him. Albany County Sheriff Craig Apple said Saturday his office was investigating the matter.

DML: I’m betting he sees this all the way to the end. No chance he resigns.

5.Chicago endures another weekend of bloodshed
DailyMail – Chicago police have arrested all three suspects in the fatal shooting of a 29-year-old female police officer who was killed during a traffic stop on the South Side as the nation’s third largest city grapples with yet another weekend of deadly gun violence.

Ella French, the 29-year-old officer who had just returned to active duty from maternity leave, was killed and her partner was seriously wounded during the armed confrontation with three suspects. French is survived by a two-month-old daughter.

The shooting of the officers occurred on another violent summer weekend in the nation’s third largest city, with at least 64 people shot, 10 fatally, by afternoon Sunday, ABC7 in Chicago reported. According to the Chicago Tribune, 47 of those shootings took place in the 24 hours between Saturday night.

DML: Blacks don’t matter to blacks.  Cops don’t matter either.  Nor do whites.  Look at the video below of the black man near kill the white man for his wallet.

6.9/11 Families Tell Biden He’s Not Welcome at the Memorial Events
Yahoo – Nearly 1,800 Americans directly affected by the Sept. 11, 2001, terrorist attacks are opposing President Joe Biden’s participation in any memorial events this year unless he upholds his pledge to declassify U.S. government evidence that they believe may show a link between Saudi Arabian leaders and the attacks.

The victims’ family members, first responders and survivors will release a statement Friday calling on Biden to skip 20th-anniversary events in New York and Shanksville, Pennsylvania, and at the Pentagon unless he releases the documents, which they believe implicate Saudi officials in supporting the acts of terrorism. The group says that as a candidate Biden pledged to be more transparent and release as much information as possible but that his administration has since then ignored their letters and requests.

“We cannot in good faith, and with veneration to those lost, sick, and injured, welcome the president to our hallowed grounds until he fulfills his commitment,” they wrote in a statement obtained by NBC News.

“Since the conclusion of the 9/11 Commission in 2004 much investigative evidence has been uncovered implicating Saudi government officials in supporting the attacks,” the statement says. “Through multiple administrations, the Department of Justice and the FBI have actively sought to keep this information secret and prevent the American people from learning the full truth about the 9/11 attacks.”

Among the documents the group seeks are supporting evidence found during a widespread FBI investigation into the attacks that examined alleged Saudi links and was completed in 2016.

DML: Biden is anti-American, no other way to say it.