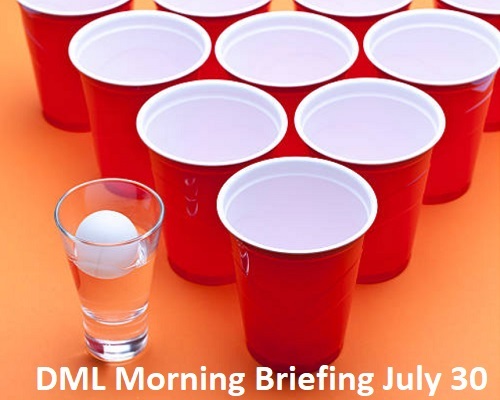 Today is July 30 and I am Dennis Michael Lynch. Below are my opinions on the stories grabbing headlines this morning. I hope you share this briefing as doing so will make you the smartest person in the room, in my opinion.

Lindell, 60, told the Wall Street Journal that he asked Fox News to run a commercial promoting the cyber symposium he plans to live stream next month.

The staunch Trump ally told the outlet that the commercial wouldn’t specifically mention claims of election fraud. However, he said the symposium ‘will prove the 2020 election was stolen’ from then-President Donald Trump.

Fox News confirmed to DailyMail.com that the network had refused to run the commercial.

‘It’s unfortunate Mr. Lindell has chosen to pause his commercial time on FOX News given the level of success he’s experienced in building his brand through advertising on the number one cable news network,’ a Fox News spokesperson told DailyMail.com.

Advertisements for MyPillow were still running on Fox News as of late Thursday night. It was not immediately clear when the ads will stop running.

MyPillow is among Fox News’s largest advertisers – and spent almost $50million on Fox News in 2020, the Wall Street Journal reported. Lindell told the outlet that, so far, the company has dropped $19million to air commercials on the network this year.

DML: So is Fox News claiming the election was on the up and up?  And now you know why I will never go back on TV.  Every person you see on that network, including some of the biggest names in radio and podcasting, do it for the money! Trust me.  I know them all, it’s 100% power, money, and fame they seek.  The truth is not of concern.

2.Evacuation flight brings 200 Afghans to US
Fox News – The first flight evacuating Afghans who worked alongside Americans in Afghanistan brought more than 200 people, including scores of children and babies in arms, to resettlement in the United States on Friday, and President Biden welcomed them home.

The evacuation flights, bringing out former interpreters and others who fear retaliation from Afghanistan’s Taliban for having worked with American servicemembers and civilians, highlight American uncertainty about how Afghanistan’s government and military will fare after the last U.S. combat forces leave that country in the coming weeks.

Family members are accompanying the interpreters, translators and others on the flights out.

The commercial airliner carrying the 221 Afghans in the special visa program, including 57 children and 15 babies, according to an internal U.S. government document obtained by The Associated Press, touched down in Dulles, Va., just outside Washington, D.C., according to the commercial FlightAware tracking service.

DML: Just what you wanted, needed and prayed for… more refugees to pay for, more immigrants to flood our neighborhoods demanding jobs, education, healthcare and social programs.  When will there be flights heading outbound?  Meaning, when do we deport 20 million people to their home countries?  The answer: Not until there is a President Lynch, or someone equal to me in the area of COMMON SENSE.

Texas Governor Greg Abbott signed an executive order on Thursday night banning mask and COVID-19 vaccination mandates to promote ‘individual right and responsibility’ in the Lone Star State.  The Republican governor announced the executive order in a press release just hours after President Biden called on states to do more to incentivize vaccination.  Abbott said, ‘The new Executive Order emphasizes that the path forward relies on personal responsibility rather than government mandates.’

Florida Governor Ron DeSantis laughed at the new CDC guidance that is calling for more widespread use of masks to help stop the spread of the COVID Delta variant. ‘Did you not get the CDC’s memo?’ DeSantis joked on Wednesday before an almost entirely unmasked audience of activists and lawmakers in at hotel ballroom in Salt Lake City. ‘I don’t see you guys complying.’

On Capitol Hill, a group of Republican staffers protested House Speaker Nancy Pelosi’s mask mandate by walking over to the Senate side of the building, where there is no renewed requirement to wear a face covering.  On Thursday evening the staffers were photographed playing beer pong (with water) in a Capitol office hallway, smoking cigars, and socializing — without masks, courting arrest by Capitol Police.

DML:  There is no doubt in my mind, Americans will be pushing back this time.  Sitting back and trusting the CDC, WHO, BIDEN and FAUCI, is no longer an option.  This is especially so for healthy adults who want to protect their children, businesses, and right to travel.

4.Twitter Says It Banned Election Audit Accounts for ‘Spam’
Breitbart -Twitter is claiming that the real reason it banned six accounts dedicated to the audit of 2020 election ballots in Arizona, Georgia, Wisconsin, Nevada and Pennsylvania is because the accounts were “spamming” the platform.

The banned accounts included @ArizonaAudit, @Audit_PA, @AuditGeorgia, @AuditNevada, @AuditWisconsin, and @AuditWarRoom. The bans came on on the same day that Congress began its partisan, Democrat-led Jan 6th proceedings, a day after PayPal announced it would work with law enforcement to monitor “extremists,” and a day after an online counter-terrorism organization of which Twitter is a member announced it would shift its focus from Islamic extremism to the “far right.”

A spokeswoman for the company claimed that the accounts were “permanently suspended for violating the Twitter rules on platform manipulation and spam.”

Twitter’s rules state that operating multiple accounts with overlapping use cases, such as identical or similar personas or substantially similar content, is prohibited.

DML: Collusion between the Democrats and social media giants is widespread, but nobody on the right appears to know how to stop it.

“Last weekend, prior to her two official events in Hawaii, the First Lady stepped on an object on the beach which became lodged in her left foot,” said spokesman Michael LaRosa.

The first lady visited Hawaii on her way home from Tokyo, where she had led the U.S. delegation to the Olympic Games.