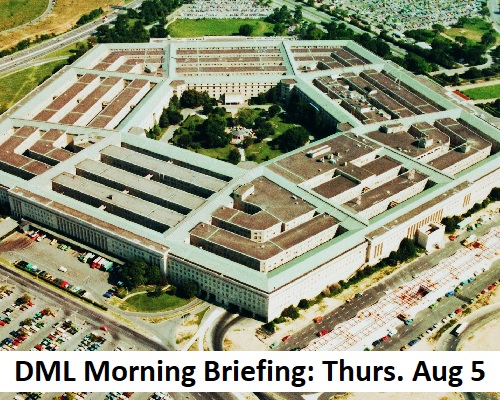 Today is August 5 and I am Dennis Michael Lynch. Below are my opinions on the stories grabbing headlines this morning. I hope you share this briefing as doing so will make you the smartest person in the room, in my opinion.

1 – Pentagon to mandate COVID-19 vaccination for active-duty force
The NY Post reports: Defense Secretary Lloyd Austin is set to announce Friday that all 1.3 million active-duty US forces are required to receive a COVID-19 vaccine, a report said Wednesday.

The decision comes days after President Biden said federal employees must either get vaccinated against the virus or submit to regular testing and observe social distancing requirements, according to Fox News.

The Pentagon would join the Department of Veterans Affairs in mandating coronavirus vaccinations for key personnel as the number of cases surges nationwide due to the Delta variant.

Because none of the vaccines have received final approval from the Food and Drug Administration (FDA), Austin must request a waiver from President Biden to make the vaccines mandatory for active-duty forces.

DML: This is an outrage!

2 – Brutal beatdown caught on video as crime spirals out of control in liberal city
Fox News reports: Five suspects in the robbery and beating of a victim at a Washington D.C., gas station are being sought after the attack was captured on video.

The Metropolitan Police Department released surveillance footage of the attack in hopes that the public will help identify the culprits.

The incident began just after 11:10 p.m. on July 24 at a gas station in the northeast quadrant of the city.

The footage appears to show three people surrounding a male near a car parked at the station. One of them is on a bicycle.

Two additional suspects later show up to assist in the brutal beating and robbery.

DML: What in the world is WRONG with people?????

Titled ‘Cultivating an Anti-Racist Mindset for Academic Administrators,’ the workshop was hosted by the Center for Healing Racial Trauma last winter, and offered instruction on how to alleviate the effects of racism and prevent it.

Spearheaded by University of Kentucky psychology Professor Candice Hargons, the session involved faculty members filling out prompts about their ‘chosen metric for anti-racism,’ to whom they have chosen to be accountable, and the steps they’ve taken thus far to address it.

Fifty of the university’s faculty members attended the workshop, according to an invoice obtained by the Young America’s Foundation which revealed the Center for Healing Racial Trauma charged $5,000 to host it.

DML: We couldn’t make this stuff up if we tried!

In total, the private jet tied to President Biden’s point person in the effort to lower greenhouse gas emissions took 16 flights since January — raising questions about how much his family contributed to the problem.

Many of these flights occurred within Massachusetts, including Martha’s Vineyard and Boston International Airport. At least two flights took place between Massachusetts and New Jersey.

Earlier this year, footage surfaced in which Kerry defended flying via private jet to receive an environmental award in Iceland in 2019. He called flying private “the only choice for somebody like me who is traveling the world to win this battle.”

In April, Kerry said there is a global push for reducing carbon emissions:

DML: This guy is a total joke!

5 – Now Dr. Fauci says he fears vaccine-resistant COVID variant could emerge this fall and warns US is ‘in trouble’ – a day after saying the nation is on same ‘trajectory’ as UK where cases have DECLINED
The Daily Mail reports: Just one day after saying he expected COVID cases to fall, the nation’s top infectious disease expert now says he fears a new vaccine-resistant coronavirus variant could emerge during the fall.

In a conversation with the Center for Strategic and International Studies on Tuesday, Dr. Anthony Fauci said the United States is on track to see cases rise like they did in the U.K., before they decline sharply.

‘Since an acceleration of vaccines doesn’t give a result until several weeks after, we are already on a trajectory that looks strikingly similar to the sharp incline that the UK saw,’ he explained.

But just one day later, the doctor said the situation may just get worse. In an interview with McClatchy on Wednesday, Fauci said so many variants have emerged during the pandemic that he fears a strain more serious than the Indian ‘Delta’ variant could be on the horizon.

He also predicted nation is ‘in trouble’ if more Americans do not get vaccinated and predicted that daily cases could double to over 200,000 per day in the coming weeks.

DML: Like I’ve said, Fauci changes his story every day. They don’t want this to EVER end.