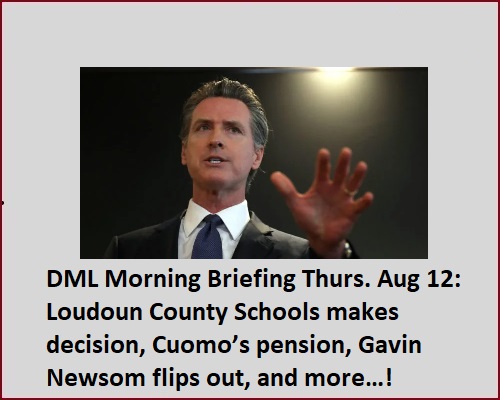 Today is August 12 and I am Dennis Michael Lynch. Below are my opinions on the stories grabbing headlines this morning. I hope you share this briefing as doing so will make you the smartest person in the room, in my opinion. And don’t forget to download the free DML App from the Google Play or Apple App Store to remain connected to me throughout the day.

In what was seen as a victory for LGBTQ advocates, the Loudoun County School Board approved the policy by a 7-to-2 vote following hours of debate and after minor amendments were made.

“LCPS’ number one priority is to foster the success of all students and ensure they feel safe, secure, accepted, and ready to learn at school,” Loudoun County Public Schools said in a statement. “The school division will continue to do its due diligence in creating that environment and remaining open and transparent with all LCPS partners, community members, and stakeholders.”

Policy 8040 requires teachers to use preferred pronouns and allows “gender-expansive and transgender students” to participate in sports and other activities “in a manner consistent with the student’s gender identity.”

DML: Time for parents to take action and vote this school board OUT!

The Sacramento Bee opinion journalists described the experience saying, “we didn’t expect him to be defiant, sometimes angry, as well as thoroughly fascinating and intense from beginning to end.” Continuing, “The governor sometimes pounded the table as he spoke. He challenged the premise of more than one question posed to him. He spoke of policy decisions that he predicted would be viewed favorably by history even if voters “kicked” him out in this recall.”

DML: What a tantrum!

The decision comes despite the Biden administration’s claim to “restore transparency and trust in government” — including with the resumption of limited release of White House visitor logs.

“I can confirm we are not going to be providing information about the comings and goings of the president’s grandchildren or people visiting him in Delaware,” Psaki said at her daily press briefing in response to a question from The Post about whether Biden would release visitor logs, including of relatives with potential conflicts of interest.

4 – Disgraced Cuomo still eligible for $50,000-per-year state pension
The New York Post reports: Gov. Andrew Cuomo’s fall from grace will come with a nice golden parachute in the form of a $50,000-per-year lifetime pension that he will remain eligible for despite his resignation — provoking outrage from the disgraced executive’s critics.

The windfall for Cuomo, who announced his resignation on Tuesday in the midst of a sexual harassment scandal, is coming because he has accumulated 15 years of state service thanks to his 11 years as governor and four years as attorney general, a pension expert said.

“So if you’re wondering, without a felony conviction and several other steps, Cuomo would be eligible for his full pension, at taxpayer expense, for the rest of his life,” said Tim Hoefer, president and CEO of the Empire Center for Public Policy.

The Empire Center crunched the numbers based on Cuomo’s annual pay and years of service and estimated he would be eligible for $4,222 a month in retirement income or $50,662 a year for the rest of his life.

Currently, a public official could have his or her pension reduced or revoked if convicted of a felony under the “Public Integrity Reform Act” approved by Cuomo in 2011, his first year as governor. But resignation for wrongdoing or impeachment does not trigger a claw-back of a public official’s pension.

DML: No wonder he decided to resign before he was impeached!

5 – Gov. Abbott issues warning to anyone who institutes mask mandates in his state
Fox News reports: Texas Gov. Greg Abbott vowed on Wednesday to take any school or local government that defies his executive order barring mask mandates “to court” after he challenged a Dallas mask order.

Abbott, along with state Attorney General Ken Paxton, petitioned the 5th Court of Appeals in an attempt to block a district judge ruling that allowed the state’s second-largest school district to require masks.

Earlier in the day, Dallas County Judge Clay Jenkins ordered that all schools, childcare centers and businesses in the county must require face coverings, after a district judge granted him temporary powers to supersede a previous order by the governor.