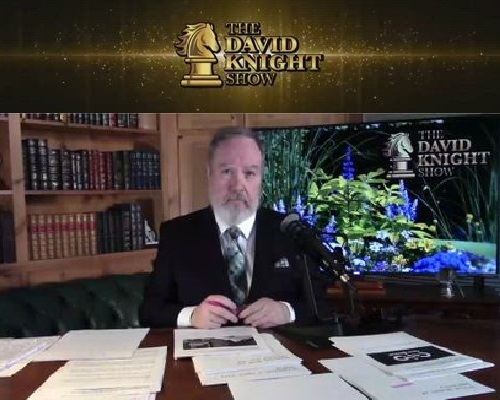 Your Host: Mike Adams.
He is helping to create a better world.
uncensored, & Commercial Free
Bypass censorship by sharing this link:

Cyber strike against America’s power grid and energy infrastructure seeks to take down the nation and sow chaos so that bad actors can cover their tracks. 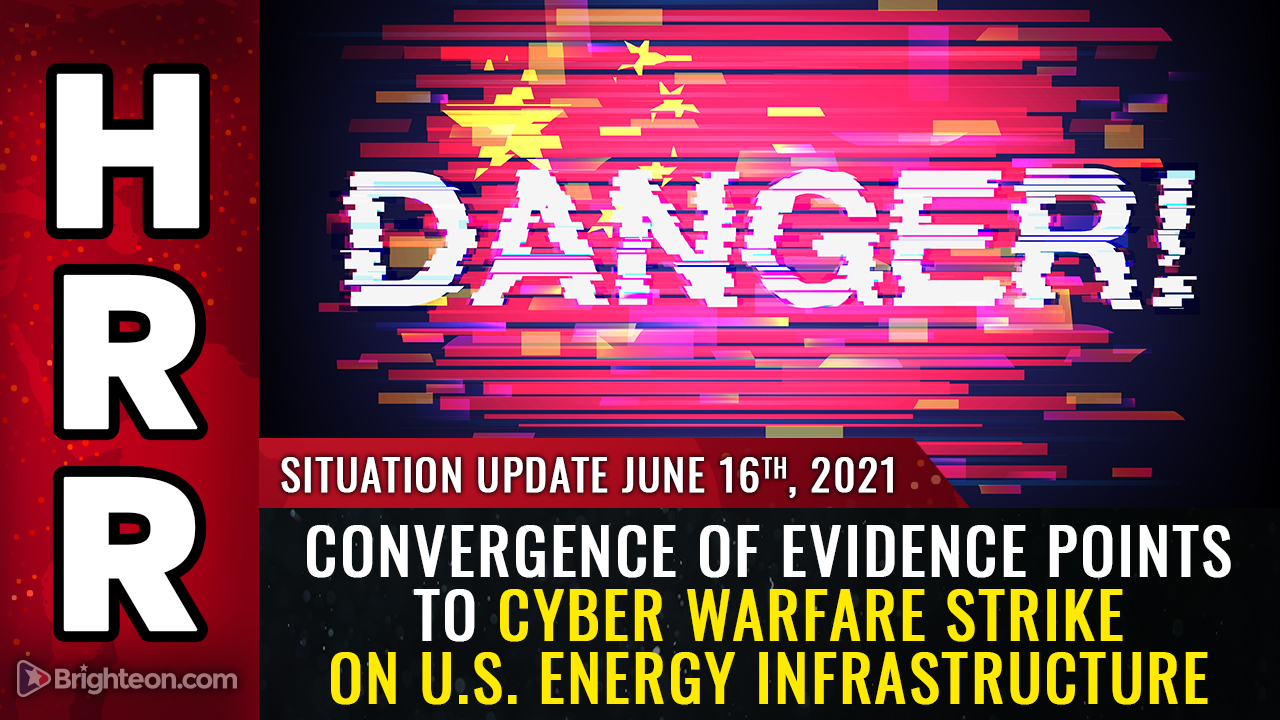 We now have intel from multiple sources, both public and private, that indicate a large-scale cyber warfare strike against America’s infrastructure will be attempted soon, possibly carried out by both the communist Chinese (for their own strategic reasons) but also potentially aided by the U.S. deep state that seeks to sow chaos in the aftermath of Arizona ballot audit results being released (estimated to occur in late July).

We are issuing this public alert with the intention of encouraging people to prepare for the possibility of extended disruptions in the power grid, fuel deliveries and even natural gas supplies. This is not a warning coming from left field, either: The last several weeks have already seen devastating cyber warfare attacks on the Colonial Pipeline, causing widespread gas shortages across the southeastern U.S. Another cyber attack targeted the food supply with hacks of JBS, one of the largest meat suppliers in the U.S.

Additional breaches have taken place in the transportation and national security sectors, with even the Associated Press now admitting to the shocking level of ineptitude when it comes to cyber defenses across the United States. In an article entitled, “Critical entities targeted in suspected Chinese cyber spying,” the AP writes:

A cyberespionage campaign blamed on China was more sweeping than previously known, with suspected state-backed hackers exploiting a device meant to boost internet security to penetrate the computers of critical U.S. entities.

Security researchers say dozens of other high-value entities that have not yet been named were also targeted as part of the breach of Pulse Secure, which is used by many companies and governments for secure remote access to their networks.

The Department of Homeland Security’s Cybersecurity & Infrastructure Security Agency, or CISA, issued an April alert about the Pulse hack saying it was aware of “compromises affecting a number of U.S. government agencies, critical infrastructure entities, and other private sector organizations.”

The Metropolitan Water District of Southern California, which provides water to 19 million people and operates some of the largest treatment plants in the world, said it found a compromised Pulse Secure appliance after CISA issued its alert in April.

Mandiant said it found signs of data extraction from some of the targets. The company and BAE have identified targets of the hacking campaign in several fields, including financial, technology and defense firms, as well as municipal governments. Some targets were in Europe, but most in the U.S.

The next cyber attack is being put in place right now and will target the power grid and energy infrastructure.

In my analysis, China is desperate to take down America before the Arizona ballot audit exposes the total fraud of the 2020 election. Once the truth comes out from Arizona, it will set into motion a series of events that could reverse the fraudulent election theft by Democrats and remove Biden (China’s mind-numbed puppet) from office.

The restoration of the Trump presidency would be devastating to China, because Trump would defend America and use the national security apparatus to target China, rather than what Biden and Garland are doing now, which is turning the government against the American people.

Because the U.S. deep state conspired with China to build a release a biological weapon, these “black hat” elements of the U.S. military and intelligence apparatus share China’s desire to plunge the USA into chaos in order to cover up their own crimes.

Thus, we have arrived at a bizarre, dangerous converge of motivations where both America’s foreign enemies and America’s own deep state traitors both want to see America’s power grid taken down, plunging the nation into chaos and mass death. Arguably, globalist central bankers also want a similar collapse to take place in order to roll out their nefarious “global reset” plans. (Download my full, free audio book called the “Global Reset Survival Guide” at GlobalReset.news)

Watch for a massive false flag event to be blamed on QANON and militia members, but actually rolled out by the FBI, deep state and communist China

The most likely rendition of all this will likely be a large-scale false flag event that takes down the power grid and can be blamed on QANON followers, veterans, militia members or MAGA-adjacent individuals (i.e. Trump supporter or anyone who loves America).

As we now know, thanks to bombshell revelations broadcast last night by Tucker Carlson, the FBI ran the January 6th “Capitol siege” false flag operation, and there’s little question that the FBI is hard at work planning something much bigger — perhaps in collusion with the CCP — to take down America’s power grid and blame it on “right-wing extremists” or something similar.

Because if America continues to function for much longer, the FBI will be exposed, the fake Biden presidency will be ended, the commie Chinese virologists will be outed as mass murderers, and the American people will take their country back from the left-wing Marxists and lunatics who are currently trying to destroy it.

Today’s Situation Update — the most important one I’ve posted in a long while — explains the rest of this scenario that seems especially precarious for the future of our nation. Via Brighteon.com, consider this a “must-listen” podcast for this week. (Duration 70 minutes.) 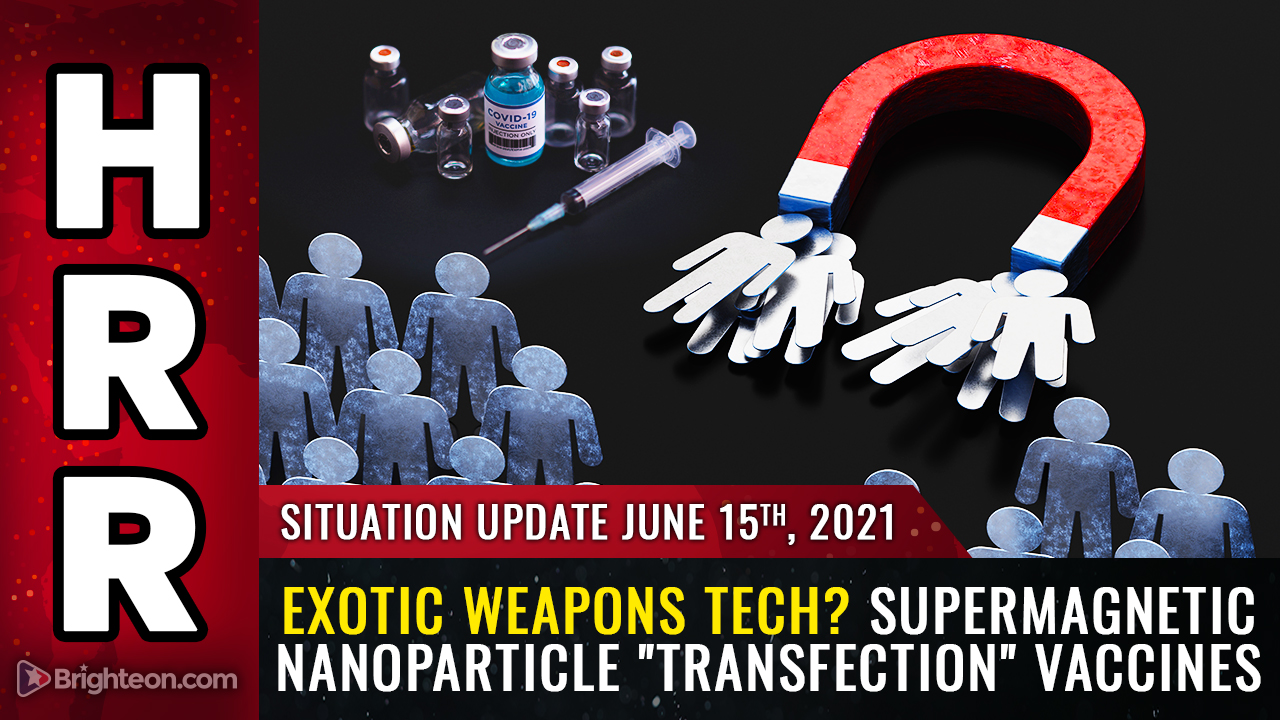 Some of the highlights from today’s Situation Update, which is somewhat outrageous but also based entirely on actual current events:
• NASA wants to put a vagina on the moon. (For real.)
• Oil industry human resources recruiter warns that companies are engaged in “succession planning” to replace those who got vaccinated.

• Eric Clapton issues new warning about the covid vaccine that disabled his hands for three weeks.
• ADT security technician goes full “digital peeping Tom” to spy on people having intercourse in their own homes. Then again, why are people so stupid that they have sex in front of security cameras? Don’t they know the cameras are streaming to ADT servers?
• Mainstream pundits now using the term “anti-White” to describe the radical Left’s bigotry and racism.
• Massive invasion of the USA now under way as Texas and Arizona take steps to get tough.
• US Senator banned by YouTube for telling the truth about hydroxychloroquine.
• Austin newspaper protects identity of young black male suspect in drive-by mass shooting.
• Democrats are calling for government confiscation of 5% of all the wealth of “rich people” in America. If they succeed, the next rounds will be 10%, then 20%.
• Some guns and ammo are now appearing back in stock, at slightly lower prices.
• More reports of severe allergic reactions to the covid vaccine. A soccer player collapses and nearly dies 12 days after the vaccine
• Why the FDA “donated” 10 million doses of the botched J&J vaccine to third world nations before demanding J&J destroy the rest of the 60 million doses.
• Why BBC presenters keep dying from covid vaccines: Vitamin D deficiency.
Hear the full podcast at Brighteon.com:

The DISTURBING psychology behind the global vaccine SUICIDE CULT.

The global vaccine suicide cult is very real, and it’s a product of mass hypnosis combined with a widespread desire for self-annihilation. Driven to the point of insanity by crazed culture and the psychological terrorism of the mainstream media, many people are now either consciously or unconsciously seeking to end their own lives — global suicides have skyrocketed since the covid lockdowns began — and now they’ve stumbled upon their final solution: The covid vaccine.
Heaven’s Gate was a California cult that ended in the 1990s when nearly all its members committed suicide after having faith that their leader — a man named Applewhite — would bring them to salvation.
In much the same way that Heaven’s Gate cult members thought they could achieve ascension and rise above humanity by consuming poison that they believed would teleport them to an “alien mothership” waiting for them on the far side of Haley’s Comet, today’s vaccine suicide cultists believe they can achieve ascension by injecting themselves with a deadly biological weapon that will transform them into a “free” human being and give them VIP status in society (thanks to their vaccine passports).
In exactly the same way that Heaven’s Gate cultists committed suicide in search of ascension to a false god, today’s vaccine worshipers are killing themselves as they pay homage to the false god of “science.” And the outcome will be the same: Mass death and shattered delusions.

When people turn their backs on God, they no longer recognize their own self-worth

Sadly, many people no longer have any sense of self-worth because they have turned their backs on God and instead worship technology, science, money or fame. Thus, they have nothing to live for other than more money and fame. When those aren’t fulfilling enough, they seek self-annihilation, not realizing that every human being is a miracle of the divine, created in the image of God.
To inject yourself with a deadly biological weapon that was engineered to terminate human lives is an affront to God and an act of spiritual and physical annihilation. I believe most people taking the vaccine, at some level, know it is potentially deadly, but they welcome the chance at self-annihilation because that’s far better than the alternative, which is being ostracized by society and rejected by their peers. Most people would rather die than be rejected, and so the vaccine propagandists are paying off social media “influencers,” celebrities and false authority figure to attempt to equate vaccine obedience with social acceptance.
This preys upon the weak-willed who define their own self-worth by the way others view them (or accept them). To reject the vaccine today, amid all the propaganda and coercion, takes an act of real self-actualization, courage and faith in God. Relatively few people possess that capacity today because they have rejected the very God that granted them life and consciousness.
Thus, those taking the vaccine are literally participating in a grand, global suicide cult that’s being carried out with mass hypnosis, brainwashing and social engineering. Just like Heaven’s Gate cultists, these people are more than happy to take the poison and end their own lives as long as it means they were “accepted” by society in the process.
The reason I mention all this is because we must understand the twisted psychology of these cultists in order to survive their mass suicide, which will impact even those of us who avoid the bioweapons injections. As mass death sweeps across economies and nations, it will have horrifying consequences to the functioning of society, including collapsing supply lines and extreme personnel disruptions in industries like finance, energy, telecom and agriculture.
Watch this shocking short video from an energy industry Human Resources professional, warning of how large oil businesses are already planning “replacement” strategies to replace their own executives who have been vaccinated. “Succession planning” is what it’s called, and according to this woman, oil executives expect that about half of those who took the vaccine will die in the coming years.
Brighteon.com/fc63b141-7205-4d89-843c-9edd7ccd738b

Listen to my full Situation Update podcast to glean more surprising details of how the twisted minds of vaccine suicide cultists actually operate: