Your Host: Mike Adams.
Situation Update for May 10th.
Bypass censorship by sharing this link: 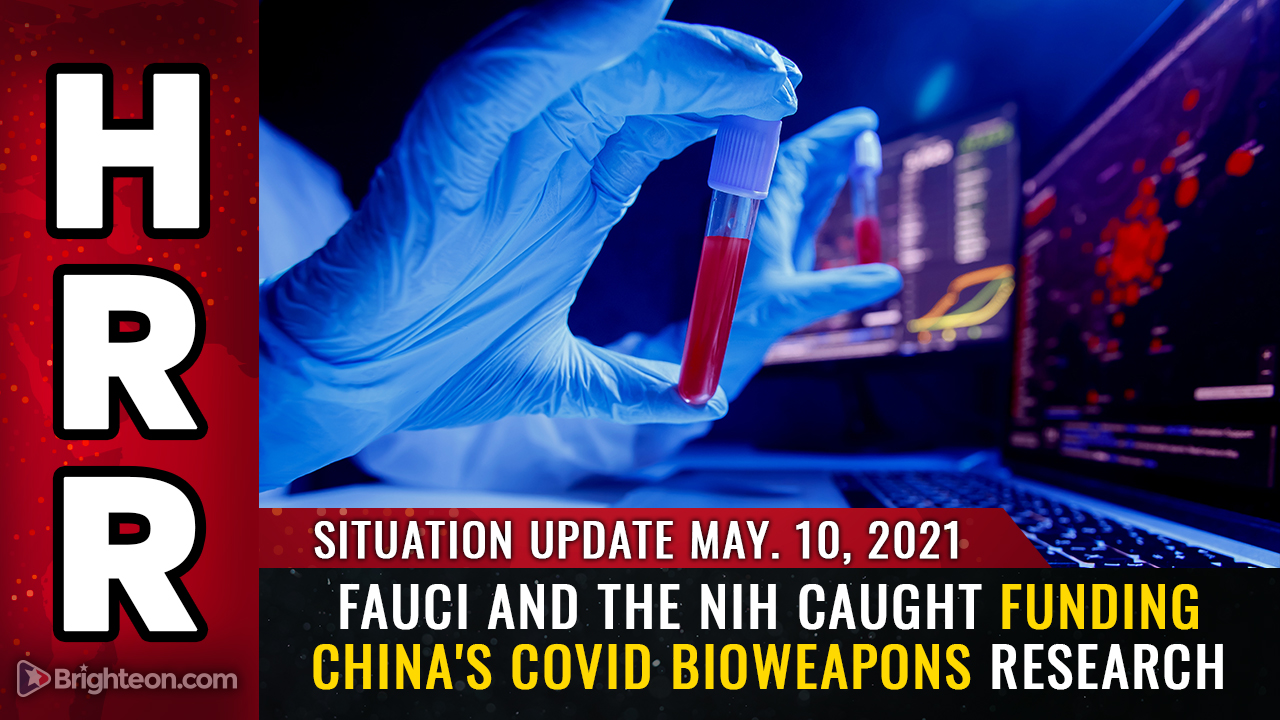 In today’s Situation Update podcast, we cover the bombshell news that communist China’s militarized bioweapons industry was funded by the NIH under the control of Dr. Fauci. They deliberately funded bioweapons development “gain-of-function” research in China, which led to the deliberate release of the SARS-CoV-2 bioweapon that’s now being used to push weaponized depopulation vaccines around the world.

The entire scheme was planned years ago, and its goal was both the global decimation of human populations and to serve as a cover story for the planned economic reset / debt implosion scenario that’s already beginning to unfold.

This was all covered by The Weekend Australian, which reviewed a 265-page document from the Chinese government that claimed a bioweapon attack, “could cause the enemy’s medical system to collapse.”

That same document revealed that biological weapons developed in China could be, “artificially manipulated into an emerging human ­disease virus, then weaponized and unleashed in a way never seen before.”

From The Weekend Australian:

Ten of the authors are scientists and weapons experts affiliated with the Air Force Medical ­University in Xi’an, ranked “very high-risk” for its level of defence research, including its work on medical and psychological sciences, according to the Australian Strategic Policy Institute’s ­Defence Universities Tracker.

The study also examines the optimum conditions under which to release a bioweapon. “Bioweapon attacks are best conducted during dawn, dusk, night or cloudy weather because intense sunlight can damage the pathogens,” it states. “Biological agents should be released during dry weather. Rain or snow can cause the aerosol particles to precipitate.

“A stable wind direction is ­desirable so that the aerosol can float into the target area.”

Among the most bizarre claims by the military scientists is their theory that SARS-CoV-1, the virus that caused the SARS epidemic of 2003, was a man-made bioweapon, deliberately unleashed on China by “terrorists”.

It now seems obvious that Fauci, the NIH and the Obama administration knowingly conspired with communist China to build the bioweapon that was unleashed upon the world in 2019. This means Dr. Fauci is a war criminal (but we knew that already).

The cyber collapse of America’s infrastructure

Also covered in today’s Situation Update: The cyber hacking and take down of the Colonial pipeline that supplies gasoline to about a quarter of U.S. states, including those along the Eastern seaboard. After hackers stole data from the central computers that control the pipeline, they forced the entire pipeline into a shut down which has now entered its third day.

This means remote hackers are able to shut down critical infrastructure in the United States. And if pipelines are vulnerable to hacking, what about power plants? Nuclear facilities? Military installations? The truth is that China has already created a “kill list” of cyber warfare targets and can take down most of the U.S. infrastructure at a moment’s notice, because almost no one has good security. And most of the computers that control critical systems across America are, foolishly, connected to the internet.