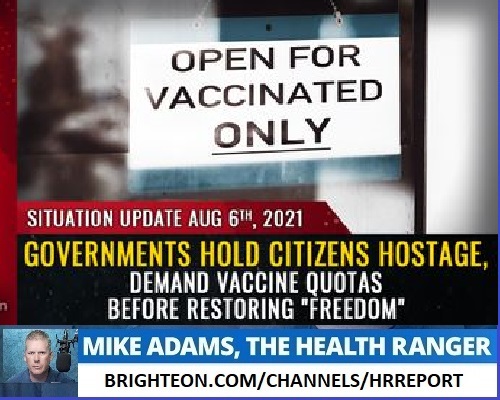 Around the world, rogue governments are now declaring their own citizens to be hostages under medical tyranny, promising that freedom will be restored if they meet vaccine quotas that require mass injections with experimental gene therapy drugs. (They’re not merely “vaccines.”)

In other words, you now have to “earn” your “freedom” from government tyranny, but the government sets the rules, and those rules are, of course, ever-changing.

As reported by the NY Post, “Six million COVID vaccine shots needed to end Sydney lockdown.” The NSW government is declaring that no one will be free until millions more submit to the deadly, risky injections. This is outright criminal medical tyranny, right in the open, and it’s the kind of tactic that might be used by professional kidnappers who demand a ransom payment to release a few prisoners.

If you comply, they’ll continue to demand more and more ransom payments, holding innocent people hostage in order to maximize their gain.

Now, governments of the world are acting exactly like kidnappers, and they are holding their own people hostage, demanding ever-increasing levels of power and authoritarian control over society, ordering everyone to comply or be arrested (or worse).

We have come to the point of history where governments now behave like criminal cartels, with complete disregard for human rights, the rule of law or constitutional limitations of government power. By screaming, “variants!” they demand absolute authority and control over not just your life but even your physical body. In America, the CDC is even now asserting that it owns your private property and can dictate your private rental contracts.

Full-blown global government tyranny is here NOW, not merely “coming soon.” We are here. There is no longer any question where this heads, and it’s rather obvious to anyone paying attention: Mass global genocide and the culling of humanity by complicit governments.

They’ve declared war on humanity. Anyone pretending this somehow goes back to normal — and that governments will voluntarily strip themselves of all this power in the near future — is living in a delusional fairy tale that will probably get them killed.